Skip to Main Content
It looks like you're using Internet Explorer 11 or older. This website works best with modern browsers such as the latest versions of Chrome, Firefox, Safari, and Edge. If you continue with this browser, you may see unexpected results.

The Viterbo University Latin American Studies Program and the Todd Wehr Memorial Library's guide to Emilio Sanchez's lithographs, which are on display throughout the library and Murphy Center classrooms.

After the exhibition, the works were installed throughout the library and various Murphy Center classrooms.

This exhibition was made possible through generous support from the Viterbo Trustee Opportunity Fund, the Emilio Sanchez Foundation, and Viterbo University's Latin American Studies program.

Emilio Sanchez was born in Camagüey, Cuba in 1921.  He began his artistic training in 1944 at the Art Students League in New York City, where he lived until he died in 1999.  However, it was in Cuba that he became fascinated with the play of light and shadow on colored forms that became a dominant characteristic of his works.

In the 1960s, he began developing prints and paintings of houses. These works stand out for their simplified forms where all unnecessary details are eliminated.

Throughout the 1970s and 80s, he further explored architecture by traveling around the Mediterranean. He was particularly impressed by the stark white vernacular buildings of Morocco.  In the 1990s, Sanchez's attention focused more on New York urban scenes of storefronts, garages and skyscrapers.

Sanchez has had over sixty solo exhibitions and has been included in numerous group shows in museums and galleries in the United States, Latin America and Europe. His art is well represented in private and public collections including over thirty museums like the New York Museum of Modern Art, the Metropolitan Museum and the Philadelphia Museum of Art. He has also received prestigious awards as first prize at the 1974 Biennial in San Juan, Puerto Rico.

Rafael DiazCasas, co-author of Hard Light: The Works of Emilio Sanchez is an independent curator and art historian with expertise in Latin American art.  Working with such institutions as Instituto Cervantes, El Museo, and the Aperture Foundation, he has written and curated exhibitions about the presence of Cuban abstract painters in New York from the 1950s.  He has also been an advisor for the Agustín Fernández Foundation, and has worked as a consultant on several projects related to Cuban art. 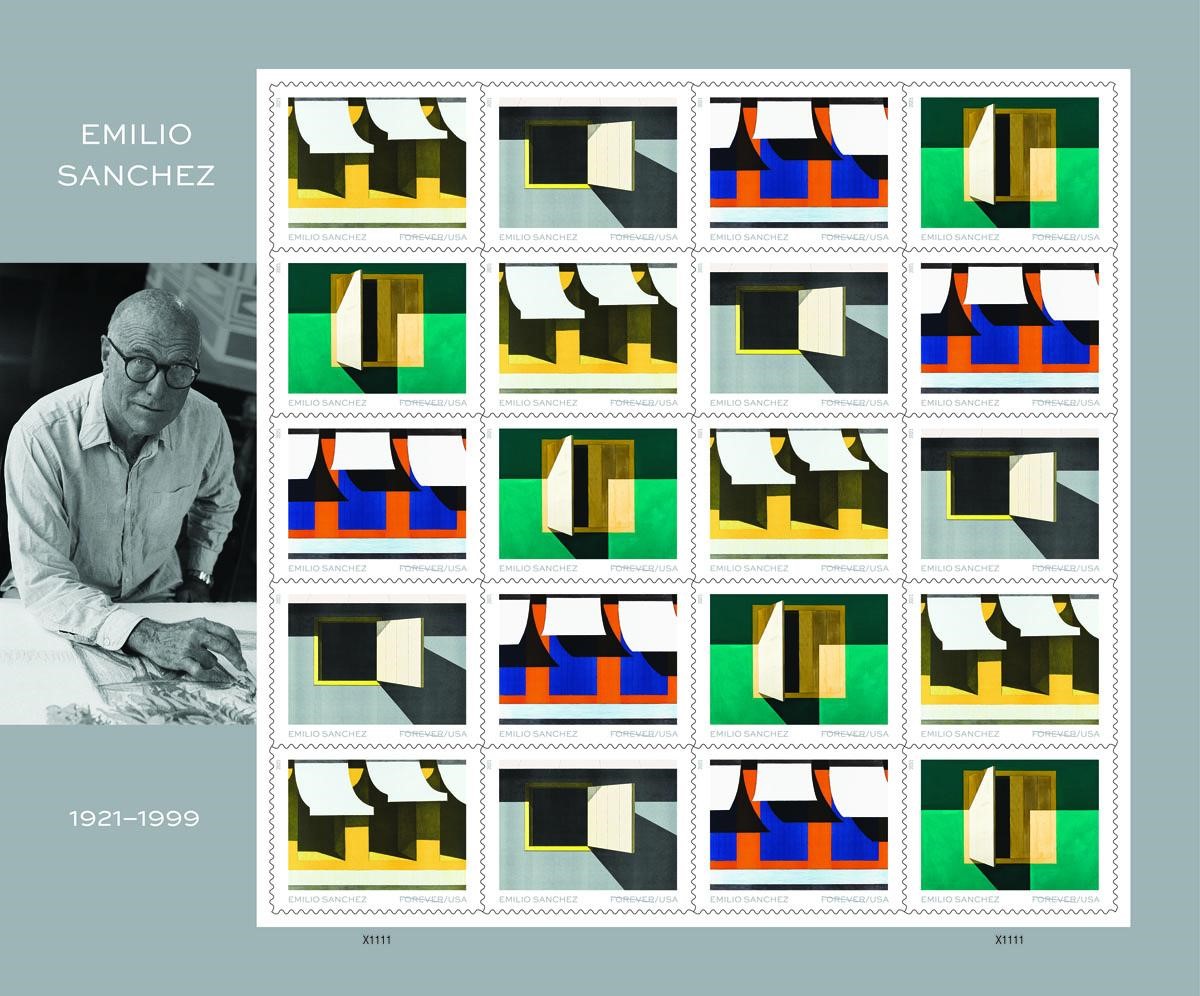 Image from the Emilio Sanchez Foundation.

The United States Postal Services features Emilio Sanchez, the first Cuban American visual artist to be recognized with a pane of Forever stamps. The stamps will be launched in the Summer of 2021 for the centennial anniversary of the artist. Date of first issuance will be announced later.  Viterbo's art collection includes three lithographs which are featured on the stamps.  The lithographs are Los Toldos, Ty's Place, and Untitled (Ventanita Entreabierta).

“The art of Emilio Sanchez (1921-1999) is celebrated with four new stamps featuring his colorful architectural lithographs and painting: 'Los Toldos' (1973), 'Ty’s Place' (1976), 'En el Souk' (1972) and Untitled (Ventanita Entreabierta) (1981). Sanchez explored the effects of light and shadow to emphasize the abstract geometry of his subjects. His artwork encompasses his Cuban heritage as well as his long life in New York City. Antonio Alcalá served as art director and designer for this pane of 20 stamps.”

News article about the stamps from the University of Miami The Shadow of Brooklyn Bridge